FLIR Systems is once again challenging the boundaries of portable thermal imaging. The new FLIR ONE and FLIR ONE Pro released at CES are completely redesigned versions of the already popular thermal imaging attachment for iOS and Android devices. The standard version pushes thermal imaging to a new price point of just $199.99 while delivering enough thermal data for light-duty, personal use–say finding the dog in the yard. The FLIR ONE Pro version, meanwhile, will be priced at $399.99, offering better imaging and temperature measurement, plus some software functionality to make life easier for the professional user. Both are scheduled to arrive in the first half of 2017.

Image
The FLIR ONE Pro is built around the exact same Lepton imaging core that FLIR used in the second generation. But there’s some magic going on here, because the image from the Pro is markedly better. We ran them side by side, thermal to thermal, and the new FLIR ONE Pro has the better picture without question. FLIR attributes this to what they call “VividIR,” an amalgamation of improvements from signal processing to the lens. One engineer told us that there are nine major steps performed to improve the image, though the marketing department wisely opted to go with the single phrase VividIR. All of these enhancements happen in real time on the screen, not simply in processing to captured images. 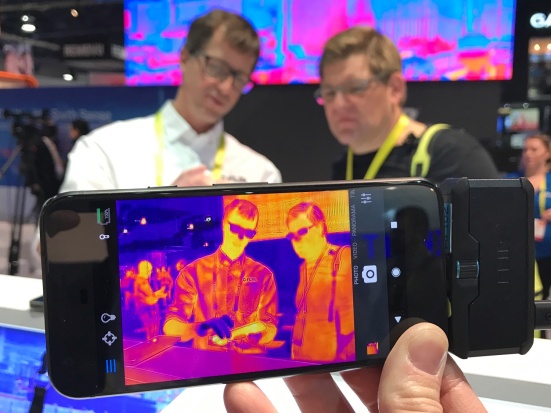 Pro Specs
By the numbers the FLIR ONE Pro thermal camera offers 160×120 resolution, though as mentioned it both feels, and truly is, like a higher resolution infrared camera. Sensitivity to temperature difference (NETD) is given at a respectable 0.1 °C. The Pro can image and measure the temperature of objects from -4°F and 248°F (-20° to 120°C). Finally, a wide angle 55° lens gives the detector a good view of anything at a relatively nearby. For longer range detail you would want a narrower lens, but the FLIR ONE Pro is great for capturing a close or large target.

Standard Specs
The standard FLIR ONE also features a Lepton detector core, albeit at a lower resolution of 80×60. Also, this standard unit will not get the benefit of the VividIR enhancements. So when imaging strictly in thermal mode without MSX (see below), such as in dark areas, the image looks a little pixilated and blocky. Interestingly, this is less resolution than the second-gen FLIR ONE. But of course the price is also more affordable. But even at this resolution, there’s still enough thermal information to solve many common household problems. And with the MSX activated the picture looks great. The sensitivity and temperature range are the same as with the Pro model, while the lens is 50° to better match the detector.

Two Cameras
As with previous versions the new FLIR ONE includes both visible and thermal cameras on the same device. This allows FLIR to combine the two images into a single MSX image, a clever trick whereby the outlines of the visible image are embossed into the thermal image. This gives the infrared data a much more usable and normal feel to some users. Also carried over is the 9hz refresh rate. While 9 frames a second feels a little choppy, and is lower than other offerings such as the Seek Compact PRO, it is nonetheless sufficient for most situations. The FLIR ONE can save images and video both to the app as well as the camera roll.

Measurement
One of the features that FLIR highlights for the Pro is the ability to measure temperature. This is a long standing application for infrared technology since it allows accurate temperature measurement of many surfaces with no physical contact. Obviously this is ideal when the target is a failing electrical connection or overheating bearing. The FLIR ONE Pro offers the standard center crosshair spot meter, as well as a new area box that can automatically identify hot or cold spots. Radiometric data is available for every pixel on the FLIR ONE Pro. Adding to the professional nature of the Pro model, the results of an inspection can be incorporated into a report right on the tablet or phone, then emailed to the relevant higher-ups.

Form Changes
The physical form of the FLIR ONE has been overhauled, with a thinner, yet tougher profile. Both models are drop rated to around 6 feet. But the biggest change on the outside is found in how the FLIR ONE camera connects to your phone. The Apple Lightening or Android USB-C connection is now adjustable for depth via a thumbscrew. This gives the FLIR ONE the ability to attach to a phone with a case, even a very thick case of the type a professional user may want. We tried a variety of cases and the new connector fit every one of them. Another great form improvement is that the USB-C connection can now be reversed, giving you the ability to point the cameras whichever way is more convenient.

Extras
The FLIR ONE is powered by its own rechargeable lithium ion battery, good for around an hour of use. It charges through a standard micro-USB charger, and can be completely refueled in around 40 minutes. The emissivity of the both models is adjustable to account for how well an object emits infrared–particularly important to measuring temperatures accurately. The FLIR ONE Pro gives even more flexibility by offering adjustable level and span through the updated app. This helps spread the contrast of the color palette (of which there are many) to areas that are of the most concern.

Conclusions
The third generation FLIR ONE continues to hone the formula of the ultra portable thermal camera. It’s thinner, lighter, tougher, and offers a better image–at least in the Pro version. The adjustable connector is a great development for the overall flexibility of the device-mounted thermal camera. And let’s not forget that the standard FLIR ONE at $199.99 will be the least expensive thermal camera ever sold. Quite a feat of vertically integrated manufacturing. In fact, one of the big takeaways from this release is that FLIR has spent great effort matching up software and hardware capabilities to improve images. As both detectors and processors get smaller and stronger, the excellent third-gen FLIR ONE is probably just the tip of the iceberg.

2 thoughts on “FLIR ONE 3rd Gen Hands On Review”