My phone buzzed the minute the new Seek Reveal PRO thermal camera entered the building. I was out of the office, but that cardboard box received more fanfare than a presidential candidate passing through town. And there’s good reason to be excited: the Reveal PRO is the first handheld camera under $1000 to offer 320 x 240 resolution thermal imaging. Staggeringly, it’s also the first under $2000, or $3000. In fact, its closest 320 x 240 competitor costs five times more than the $699 Reveal PRO. So does it deliver? Indeed it does. And while there are some things I might change, the Seek Reveal PRO easily earns a home in my tool bag, even as it shatters expectations about what a thermal camera should cost.

Image
The Seek Reveal PRO detects infrared light from 76,800 pixels at a time and instantaneously renders these as an image. Even at 100 yards, it’s enough resolution to easily spot another person. In what has become one of our favorite features of recent Seek products, the Reveal PRO includes their “FastFrame” technology, bringing a considerably higher image refresh rate. While most thermal cameras under about $4000 run at 9 frames per second, the Reveal PRO refreshes somewhere between 15 and 30 times a second. This has the welcome effect of smoothing the image considerably whenever motion is involved.

Speed
We love the image capture speed of the Reveal PRO. Most thermal cameras take about two seconds to record an image—an eternity in a world of fast digital cameras. So when the Reveal PRO captures an image in about a half-second, barely interrupting the scene in view, count it a victory for those of us digitally conditioned toward speed. Images are saved to an internal flash memory drive, with room to store over 4000 pictures. The thermal images are saved in a common PNG file format, and are easily downloaded to any computer with the included USB cable.

Navigation
A simple three-button interface also makes the Reveal PRO simple and quick to use. At least until you want to change a setting. You access the main menu by pressing the center button, then navigate up or down the menu by using the side buttons. This navigation is one of the few shortcomings of the Reveal PRO. Navigating up and down by pressing left and right just seems confusing. Even so, I was surprised how quickly my brain adapted to the task. Fortunately the camera starts up with the same settings as last used, meaning I rarely needed to access the menu system. If you frequently use the Reveal PRO in the same configuration, the simple interface presents a significant advantage. Fast startup, fast frame rate for scanning, and fast image capture.

Level and Span
In another first, the PRO is the first in the Reveal family to offer adjustable level and span. I’m in the camp contending that this is a must-have feature for any thermal camera. Oversimplifying a bit, it allows the user to more tightly control the range of temperatures to which the camera assigns color. For example, if I am looking for a moisture leak in a ceiling, I need to see some very subtle temperature differences between the wet and dry parts of the ceiling. But if there is a hot light fixture in the image, a thermal camera in auto mode will assign a huge portion of the available colors to the light fixture. This will make it much harder to see the pattern of water on the ceiling. But with ability to set the level and span manually, I can essentially eliminate the effect of the light, allowing the Reveal PRO to assign more color to the temperature range of interest.

Rugged and Portable
One of the many ways in which Seek Thermal has challenged the status quo is through the form of their cameras. They have never produced any models in the near ubiquitous “pistol grip” format. The Reveal PRO is roughly rectangular and about around an inch thick. It fits very well in a pocket. But portability can be a two-edged sword; witness the abundance of cracked phones. Seek has done a very good job making the Reveal PRO tough to break, even including Corning Gorilla glass on the display. Constructed of tight fitting rubber and plastic, the unit also appears to be reasonably water and dust resistant. 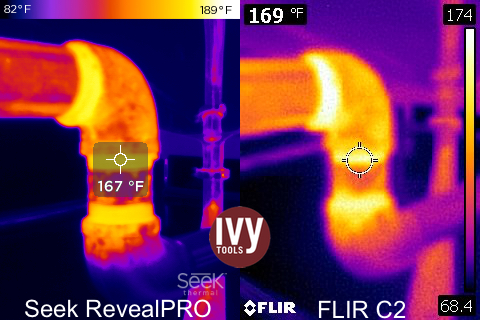 Manual level and span feature of the Reveal PRO allows better imaging of targets such as this heat exchanger pipe.

When considering a field test comparison for the Seek Reveal PRO, the clear competitor to review is the FLIR C2. The two units are priced identically at $699, and both are rugged, stand-alone thermal cameras. You might also consider the FLIR E4, as it meets these criteria. But with a $995 price tag and similar imaging performance to the C2, the E4 becomes mostly a choice of form: whether or not you prefer the pistol-grip style camera. Other options for sub-$1000 thermal imaging include the cameras intended for smart phones. These range from the FLIR ONE (160 x 120, $249) to the impressive new Seek Compact PRO (320 x 240, $499). But while the Reveal PRO compares favorably with these devices, it’s likely that you’re not choosing between plug-in units and stand-alone thermal cameras since the user experience and form factor is so different.

The FLIR C2 Thermal Camera features the first generation Lepton core with a resolution of 80 x 60, for a total of 4800 pixels. With a rather wide lens affixed, this is enough resolution to locate most larger thermal features inside a building, or at a close distance of ten or twenty feet depending on the target size. But it’s simply not enough thermal resolution to paint a detailed picture or recognize a more subtle pattern. The FLIR C2 compensates (ingeniously) for the lack of thermal detail by incorporating a digital camera and using contrasting edges from the digital image to add detail to the thermal image in real time. While this only works when there is light available, it makes the live and captured image look very crisp, and makes the camera a pleasure to use. But no matter how good this MSX image looks, there’s still a deficit of thermal data. And that’s what you want when you buy a thermal camera.

Train your eyes: which has more resolution?

In other ways the FLIR C2 seems to best the Seek Reveal PRO. We love the touchscreen interface of the C2. In fact we hope FLIR and other manufacturers extend this screen to their other offerings. The screen of the C2 will also automatically orient from horizontal to vertical according to how the camera is held. And while the C2 screen is probably not as tough as the Gorilla glass on the Reveal PRO, the C2 is encased in more rubber and seems even tougher to break. As mentioned above, the menu of the Reveal PRO leaves plenty of room for improvement, yet the C2 navigation structure is among the best in the business. 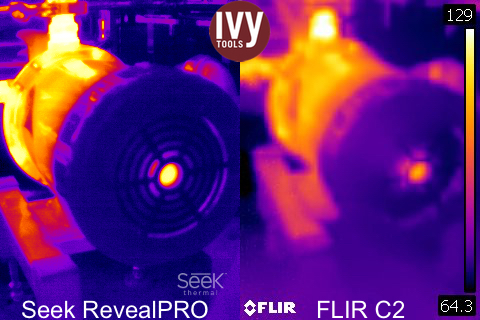 But there’s just no getting around the fact that the Reveal PRO is a much better thermal camera. The level of detail provided in the 76,800 pixel image is 16 times more than the thermal data of the C2. As seen in these images, it’s even enough detail to effectively make the MSX feature of the C2 unnecessary. We love MSX on lower resolution cameras, but it’s only helpful at higher resolutions if you need to read a label or logo. Furthermore, if you are looking at mid- and long-range targets, whether overheating electrical equipment or criminals looking to evade detection, the Seek Reveal PRO has the resolution and sensitivity needed to go the distance. 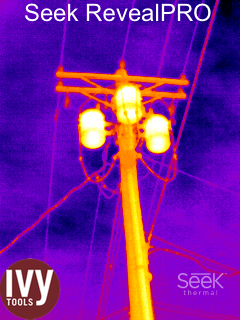 Questions or comments about the Seek Reveal PRO Thermal Camera? Feel free to give us a call at (877) 273-2311, or drop us a line at [email protected]