Update: See our review of the newest FLIR ONE Infrared Camera for iOS and Android.

The new FLIR ONE iPhone Infrared Camera launched to swarming crowds this week at the Consumer Electronics Show in Las Vegas. The FLIR ONE is an accessory case for the iPhone 5 and 5S that snaps onto the back of the phone, adding a fully integrated thermal imaging camera. Thermal images and videos can be captured to the phone and shared seamlessly through Facebook, Twitter, text message, and all the other ways you would expect from an iPhone. Priced at $349 and available this spring, it is undoubtedly the best iPhone accessory at the CES show this year. And in a sea of accessories, that’s saying something.

Born out of the FLIR mantra of “Infrared Everywhere,” the FLIR ONE also bears its own apt motto, “See the Heat.” The thermal camera of the FLIR ONE can visualize the temperature patterns of almost everything on the earth, from 32 to 212 °F (0 to 100 °C). Consider the possibilities–iPhone users everywhere can now view the world around them in a completely different band of the electromagnetic spectrum. As millions of users gain access to the technology in coming months and years, it seems likely that current infrared applications will be eclipsed by yet unknown uses. Of course it also seems inevitable that YouTube will be overrun with infrared videos of cats. 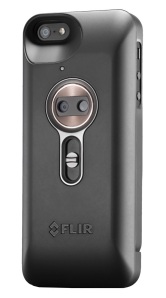 Hardware
The FLIR ONE iPhone Infrared Camera is composed of two interlocking cases. A thin wraparound case stays on the iPhone, appearing and performing as would any minimalist iPhone case. Yet this basic surround also facilitates a secure and quick connection the the main thermal imaging unit. The two cases together add a negligible 3.2 ounces to the iPhone. Those currently using larger iPhone cases will notice little difference. The FLIR ONE roughly doubles the thickness of the current phone, making it just a bit thicker than the first generation iPhone.

Resolution for the FLIR ONE is 80 x 60, for a total of 4800 pixels. While not overwhelming when all the talk is about 4K televisions, users of infrared are predominantly looking for thermal patterns, not capturing the family vacation at Disney. (Prediction: Infrared mouse videos on YouTube.) FLIR has also applied some great technology to help users get the most out of the resolution. Multi-Spectral Dynamic Imaging, or MSX, makes use of the second camera visible on the FLIR ONE, a visible light camera with a resolution of 640 x 480. MSX uses the visible light image to mine data about surface patterns and edges, then embosses this information into the thermal image. The effect is that the somewhat low thermal resolution is much more intelligible to the eye, giving the impression of a much higher resolution. 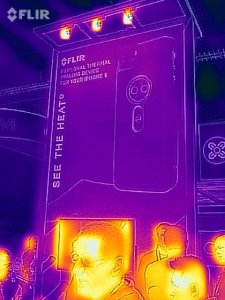 For the first time on any of their portable thermal cameras, FLIR has also incorporated image enhancement technology. When capturing a still image the FLIR ONE will actually take a series of images. Because of the slight movement of the body these images are capturing thermal data from slightly different positions, meaning the thermal detector has actually captured more than just 80 x 60 pixels. The FLIR ONE will instantly stitch these images together into one combined image with a resolution of 160 x 120, or four times the stated resolution. Now you have a 19,200 pixel iPhone IR camera.

Software
The FLIR ONE operates using a free application available in the App Store called FLIR ONE MX. Current specifications call for iOS 7 or above. FLIR ONE MX is capable of viewing a live stream at 9hz, and can capture thermal still images (.jpg) and thermal video (.mov). The stored media can be shared via Facebook, Instagram, Twitter, and more, as well as sent by email and sms text message. For even more options and convenience, images can be saved to the iPhone camera roll. Additionally, FLIR will be offering a software developers kit (SDK) that will catalyze innovative incorporation of the thermal camera into many other available apps. 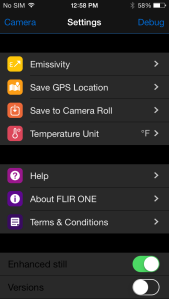 Screenshot of the menu from the FLIR ONE.

The user interface of the FLIR ONE MX app is befitting the iPhone, and the controls are simple and intuitive. Color palettes are changed simply by swiping left or right, and image capture and review is located at the bottom of the screen, similar to the iPhone camera interface. The settings menu is a welcome single level deep, with simple sliding switches to toggle features on and off. One notable item on the settings menu is the option to store GPS data with the thermal image. While previously available on some of FLIR’s professional thermal cameras, this is a excellent inclusion on the FLIR ONE, and a feature that many iPhone users have come to expect. The menu also allows the user to turn off the center crosshair that measures temperature, a convenient option for capturing unobstructed images when temperature measurement is unnecessary.

Core
The FLIR ONE iPhone Infrared Camera is built around FLIR’s new Lepton thermal core. Sized at around 3/8” cubed, the Lepton incorporates the 80 x 60 thermal detector and associated processing. Users familiar with thermal cameras will notice that the FLIR ONE does not perform the occasional “clicking” correction function found on most imagers. This correction is necessary to ensure that the image is accurately portrayed, and is essential to good temperature measurement. Instead of an automatic function, the FLIR ONE signals the user to perform the correction by applying a symbol on the screen. You slide the switch on the back of the case downward, and the camera will manually perform the correction. This user initiated correction function saves on the packaging size for the Lepton core, and ultimately the overall size of the FLIR ONE.

The FLIR ONE unit incorporates a battery pack capable of powering for the infrared camera for roughly two hours of continuous use. Conveniently, the battery can also be used as a booster for the iPhone by toggling a function in the FLIR ONE MX app. The FLIR ONE includes the two cases, USB cable, and a leatherette carrying case. 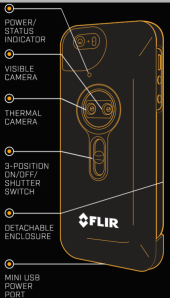 Final Thoughts
In the same way that the iPhone digital camera has not replaced the SLR digital camera, the FLIR ONE is not going to replace the FLIR thermal cameras used by professionals the world over. Like the iPhone, the FLIR ONE has no focus operation–nor is one necessary in most conditions. The FLIR ONE will also not be the camera of choice for those who need to see fine thermal detail, view images at a long distance, or make very accurate temperature measurements. But using the same SLR analogy, the FLIR ONE is positively the first available “point and shoot” thermal imager. It heralds the coming wave of thermal cameras enabling us to literally see the world in a different light. FLIR has taken the brilliant first step in helping us all to “See the Heat.”

For a look at the FLIR ONE in action, see the thermal video we recorded at CES.

20 thoughts on “Hands On Review: FLIR ONE iPhone Infrared Camera”