The FLIR Ex-Series of infrared cameras offers superb value and a great entry-level feature set. The series is comprised of four camera models, the FLIR E4, FLIR E5, FLIR E6, and FLIR E8. Pricing borders on incredible, spanning from the $995 E4 to the $5995 E8. All imagers include the same digital camera, FLIR MSX image enhancement, a 45º wide angle lens, and an excellent rubberized housing. This commonality of features leaves many asking, “What’s the difference?” Here it is: the primary variable in the Ex-Series is resolution. Resolution refers to how many points or pixels make up the image you see. More pixels give better definition and crispness to a scene. The chart below summarizes the differences in resolution amongst the Ex-Series cameras.

FLIR E4 looking down a stairwell at missing insulation. 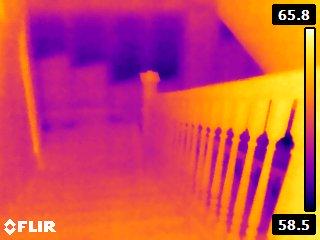 What Can I See?

The next question that arises is much more practical: “What can I see?” If more resolution is better, what does that really amount to? To answer this question we set out to capture a common scene using all four of the Ex-Series cameras. We ended up with two scenes in the same house, an early 20th century Victorian. All images were captured just minutes apart on the same day, from the same spot, and under the same conditions. For the sake of comparison, images are shown at the same size as would be seen on the camera itself.

While resolution is the primary difference you see in these image sets, it should also be noted that thermal sensitivity plays a big role. In the chart above you see that the sensitivity gets better as the cameras increase in price, with the E6 and E8 having the best sensitivity. The sensitivity can be seen in the first image set by contrasting the E4 and the E8 pictures. The E4 shows the missing insulation as roughly uniform color, while the E8 shows a good gradient of temperatures on the sections of missing insulation. This subtle color variation reflects the better sensitivity of the E8 (2.5 times better).

Which camera is right for you? That will depend on what you need to see. If you are always very close to a target that has a high temperature, you might be happy with the FLIR E4. If you are investigating buildings for water or energy issues, you will need the resolution and sensitivity of the E6 or E8. The standards set by energy auditing groups such as RESNET are also met by the E6 and E8 cameras. Choosing between the E5 and the E6? Consider that the E6 has almost double the resolution and sensitivity to get the job done. No matter what you choose, we hope these images prove helpful in showing the everyday, practical difference between the FLIR E4, E5, E6, and E8. Please give us a call at (877) 273-2311 and we would be happy to make a recommendation for your specific application.

You can learn much more about the FLIR Ex-Series Thermal Cameras at the main Ivy Tools website.

FLIR E4 looking at a wall with a walk up attic on the other side. 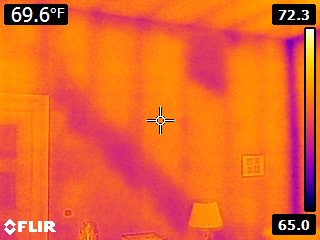 2 thoughts on “Comparing FLIR E4/E5/E6/E8 Infrared Cameras: Which One Do I Need?”